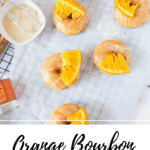 Light, fluffy, and moist citrus doughnuts drizzled with a sweet maple bourbon glaze and ready to enjoy in under an hour! What could be better? Actually, I’m having a hard time deciding if a cakey doughnut for breakfast or the fact that these make it totally socially acceptable to have bourbon for breakfast is the best part. Either way, these orange bourbon glazed doughnuts are kick a$$ (excuse my language, it must be the bourbon talking.)

Truth be told, I’m not the doughnut lover in the family. Brian, on the other hand, we’ll he could take down an entire dozen! But these bad boys, I couldn’t keep my hands off of!

With a splash of OJ and fresh orange zest, these doughnuts have a zesty citrus twist. Bright cheerful flavors blend perfectly with the rich, smooth caramel notes from the bourbon. Trust me, these doughnuts are addicting!

The first thing to note is that these doughnuts are NOT fried! But, don’t worry they’re still heavenly! The base of the doughnut is made from organic flour, but you can make these gluten-free by using gluten-free 1-1 flour as well. To begin, make your vegan buttermilk by combining the oat milk with apple cider vinegar and let it sit for 5-10 minutes or until it begins to separate.

Next, combine the flour, baking soda, baking powder, and salt in a bowl.

Start adding in the flour mixture but only combine half. Then add in the vegan butter milk. Finish adding the dry ingredients and stir only until combined. Don’t over stir!

From there, I like to put the batter into a baggie so it’s easier to squeeze into the doughnut pan. However, if you don’t have a pastry bag or baggies, just scoop the batter in with a spoon. Then simply bake it for about 15 minutes and they’re DONE.

What’s the difference between a baked cake doughnut and a fried one?

Well, the obvious answer to this is one is fried. But, there’s more to it! A fried doughnut is traditionally made with yeast and has a doughy, fluffy, bread-like consistency. On the other hand, a baked cake doughnut is more like a mini cupcake baked into a doughnut shape. It’s made without yeast and has a soft and spongy texture.

These doughnuts wouldn’t be called orange bourbon glazed doughnuts without the bourbon glaze! The glaze is simple, but dang is it good! All you need is 1 Tbsp of bourbon, I used bullet bourbon, some vegan powdered sugar, and a drizzle of maple! Mix everything together and tadaaa! The easiest boozy glaze you ever did meet.

Now if somehow you manage to have leftovers, the best way to store these doughnuts is in an airtight container in the fridge! Because they have citrus in them, they doughnut (haha) last as long left out on the counter. When you want to enjoy one, simply take out of the fridge and allow the doughnut to sit at room temperature for 15-20 minutes for the best texture!

* Don’t over stir the batter! The doughnuts will stay light and fluffier if you stir only enough to combine ingredients.

If you want to become a food creator, start right

Even if the world around you says more more more,

Heading into a slow weekend full of baking and I c

At the end of the day, if you’re creating in a w

dear creative, you deserve to take care of you, f

Just remember, a previous version of yourself is s

Instead of being let down when a partnership doesn

It feels good to enjoy creating again… to let ea